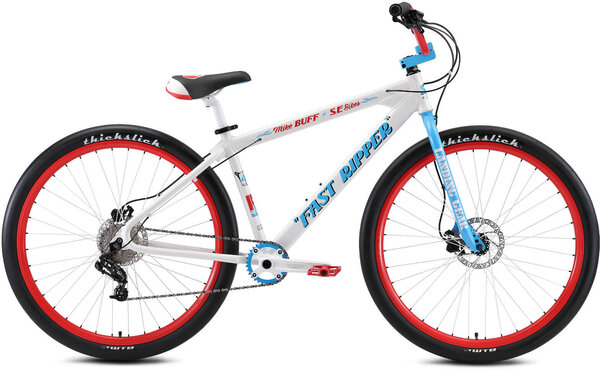 This item is currently not available.

What is Open Box? An Open Box is a bicycle that has been previously opened, inspected, and repackaged. Open Box bikes are models that were received by our warehouse with some box/packaging damage. Our team preforms an inspection to be sure all parts are included and then carefully repack. Open Box bikes have not been ridden or used- Some bikes may have minor scuffs or signs of wear from shipping, but many do not. Every bike is protected under the SE manufacturer warranty. All Open Box sales are final.

A Mike Buff Fast Ripper? You bet! Buff loves to ride all kinds of SE bikes and the 29” Fast Ripper is one of his favorites. It was only a matter of time until he put his personal spin on the Fast Ripper. Buff is a BMX pioneer who helped introduce freestyle BMX to the world. As one of the original godfathers of freestyle, he rode a PK Ripper in the early 1980s when he was a member of the legendary BMX Action Trick Team. The Mike Buff Fast Ripper has a similar colorway and style as the legendary PK Ripper that he made famous. This Fast Ripper comes equipped with a SRAM GX 1x10 drivetrain, Shimano Deore 10-speed cassette, Tektro hydraulic disc brakes, and Freedom ThickSlick tires. This thing is FAST!